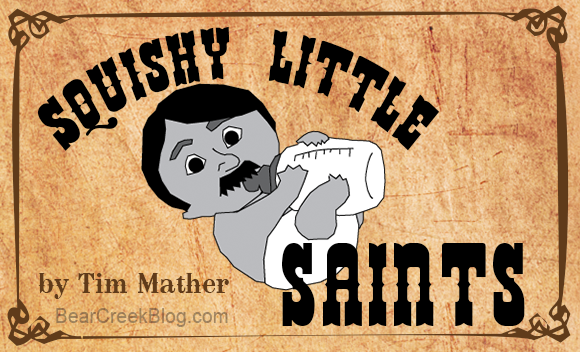 Sheep. No, lambs. That’s what we really are. Unhealthy, powerless, squishy little lambs unable or unwilling to make decisions without the Sheriff Sheep who pretends to provide a pastoral covering of spiritual authority over us.

So when folks come out of the institutional church system, they are always lambs without the skills to survive, let alone overcome.

In this Promised Land outside the institution, you must find folks older in the Lord who have been consumed by His fire. He has planned this strategy down to the last detail, so they are around you somewhere. But once you have located them, remember that they are to be your guides, not your pastors. They are not to tell you what to do. That’s the control system of the institution. The new elders will not treat you like you’re ignorant, but will demand you pursue Father and become mature. In more certain terms, they will enable you to grow up!

The programs of the traditional church structure, by their very nature, are relegated to the lowest common denominator. Since there are always babies being born into the Kingdom family, that denominator is the spiritual baby. Because of this, the pastor must gear the majority of the church programs toward the babies. This was a problem from the beginning of the Called Out Ones.

“We have much to say about this, but it is hard to explain because you are slow to learn. In fact, though by this time you ought to be teachers, you need someone to teach you the elementary truths of God’s word all over again. You need milk, not solid food! Anyone who lives on milk, being still an infant, is not acquainted with the teaching about righteousness. But solid food is for the mature, who by constant use have trained themselves to distinguish good from evil.” Hebrews 5:11-14

Apparently, the institutionalization of the Saints was in full swing by the time the book of Hebrews was written. They were out on their own, away from the constant teachings of the Apostles. They began organizing and sterilizing the teachings of Jesus by not pressing one another toward maturity. Humans are notoriously lazy. We want others to tell us what to do and to keep us in line. It is uncomfortable to mature. It is easy to let mom and dad pay for the house and the food while we sleep until noon in a bed for which we did not pay. “Growing up” means taking responsibility for one’s life, going to work, paying the bills, and suffering the joys and defeats of adulthood.

We don’t want to grow up spiritually, either. It’s a whole lot of work. Let papapastor do it all. After all, that’s why we pay him the big buck.

The issue here is a wrong view of the salvation process. The Scriptures parallel spiritual birth with natural birth. Yet, with the development of crusade evangelism, preaching to the lost with emotional manipulation forces them to make an immediate decision. The pressure of ‘the decision’ to convert to Christianity is given no incubation period, resulting in thousands, if not millions of premature spiritual babies. When does the birth process really begin? Is it the moment when the baby’s head emerges from the birth canal? Is it when the child first breathes outside the womb?

No. It begins in intimacy, in a relationship which produces conception. What follows is nine months of swollen ankles, morning sickness, and mood swings. The baby grows from the convergence of seed and egg into a glob of tissue, into a fish-like creature, into a miniature baby, and into a viable person prepared for life outside the womb. Then. labor begins: Pain, cramps, and, frankly, a big mess. The water breaks and people are drawn together in anticipation of the emergence of a new member of the family. The baby, now in position with head down, transitions and makes what is always a dramatic entrance into its new environment.

Crying is the universal “all-is-well” sign, and then it’s off to the races.

Every time you look at this kid, he’s bigger, brighter, knows more stuff; now he can laugh, now he can sit up, then he crawls, followed by the piece de resistance: He starts talking and walking. Then, for the next twenty years he grows steadily into a man.

But, if after all the time and energy and love invested in this man, you still have to spoon-feed him strained prunes, something is drastically wrong. Our expectation is that he will be able to do those things and more on his own all in preparation for the time when he will go out and develop an intimate relationship with someone and produce his own children.

However, because the institution is relegated to the lowest common denominator, thirty-year-old saints must be content to exist on whatever comes out of the pastor’s blender, strained and pureed for the youngest among us.

We have rushed the birth process of such a large percentage of the current population of the Called Out Ones by using emotionally manipulative pleas to tap into people’s guilt and fears, inducing them to “pray the prayer and making a decision to receive Christ.”

This is frequently a forced, premature birth. They must be given the opportunity to have a divine revelation of the risen Christ compelling them to give their lives fully to Him. Quick fix “fire insurance” does not make disciples of Christ who die daily to self to find an intimacy in relationship with their Savior.

Therefore, the traditional church is nothing but an intensive-care ward full of incubators with preemies of all ages on life support. Imagine a thirty-year-old squished into an incubator!

He will not know life as it is intended to be. He will not be able to do anything for himself. He needs to be fed rather than having the basic skills needed to feed himself. He will not know the assurance of his salvation. He cannot discover the full extent of his stature since he is confined in someone else’s space. He will live his entire life within the confines of the box and will never know the difference.

It is my contention that the failure of the church can be traced directly to the pews full of premature babies.

The squishy little Saints in most churches are milk-fed throughout their entire existence, never maturing enough to stand fast in their own faith enough to reproduce another person into the Kingdom. House churches are most often just a smaller version of that dysfunction.

Consequently, leadership among the family and extended-family meeting at your house should feature a parent/guide who celebrates every new understanding, every new depth of relationship with both Father and others in the group, but who, in the end, must get out of your house!