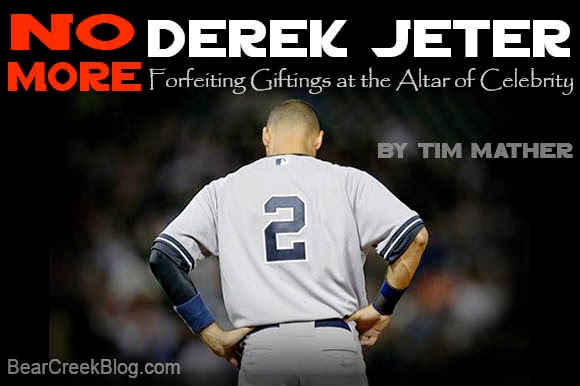 Yankee fans (I can sense the puke rising in the back of my Southern friends’ throats) are still in mourning at the retirement of the Captain, Derek Jeter. He has been one of the greatest shortstops of all time, endearing himself in the hearts of the fans and ensconcing his name among the immortals enshrined in the Baseball Hall of Fame. But I would guess there are a couple of guys secretly thrilled at the news that Number 2 is flying the coop: the backup shortstops for the New York Yankees.

While we celebrate the talent of the man and sit in awe at his graceful play, his greatness has been in the way of others realizing their dream, their vision, their talents, and gifts.

The kingdoms of this world are smitten with celebrity. Whether it’s sports figures or actors or maybe even politicians (there comes the puke), we love them in all their natural charm and gifts. In fact, we often live vicariously through their accomplishments and calamities. When some famous person passes on, people weep and mourn as if they actually had a relationship with them.

But here’s a thought: Don’t we live in the upside-down Kingdom, the Kingdom of God? In this Kingdom there is only one celebrity and He sits on the throne above all things, the King of the Universe, the Living God, the Ancient of Days, and He shares His glory with no one. Yet, we Saints foster our own celebrity culture, degrading ourselves at the feet of mere men, forsaking the inheritance of the One True God.

We sit with our collective tongues hanging out as these self-appointed “giants” of the faith parade before us singing, teaching, preaching, healing, or prophesying without a whiff of concern that OUR gifts are being forfeited on the altar of celebrity.

What to do? I think it’s time to stand on our heads and let HIS blood rush to our heads.

It’s pretty clear, I think: Jesus hates titles. Why? Because it is diametrically opposed to upside-down Kingdom concept of brother-kings. Look back at the underlined part. The gifted, the anointed, the talented are to be servants of the rest. Does it mean that we despise their skills? No. In fact, in our study of societies with servants (as opposed to slaves) it is a despicable thing to acknowledge a servant or the work he/she is doing; it is offensive to the servant because if they did their work well they would not have been seen. If they were acknowledged that meant they performed poorly.

That’s really upside-down thinking, especially for those of us who’ve grown up in a culture that craves fame.

The celebrities reinforce – adamantly – the ultimate celebrity culture: what they call the Five-Fold Ministry.

So Christ himself gave the apostles, the prophets, the evangelists, the pastors and teachers,
to equip his people for works of service, so that the body of Christ may be built up
until we all reach unity in the faith and in the knowledge of the Son of God
and become mature, attaining to the whole measure of the fullness of Christ.
Ephesians 4:11-13

Titles everywhere! Not so much.

Notice a few things:
1)   Christ gave people, not gifts, talents or anointings. These aren’t intended to be titles;               they are a recognition of the nature and characteristics of a person out of whom flows some sort of activity beneficial to the Body of Christ. They are not offices or spiritual gifts, as is most often taught, but identities of individuals given as gifts to the rest of us. While we are thrilled to have them among us, they must not be placed on pedestals since that will destroy them as well as render them ineffective to those they serve.
2)   The identities of these five kinds of people are true reflections of Jesus, the one sent with orders to reproduce himself, the prophetic voice of the Living God, the source of the good news, the good shepherd, and the model for us to follow in our quest to know Father. These folks are the five faces of Jesus.
3)   These people must only do as models to assist in our transformation into the image of  the Most High. The danger of them doing is that the image of Christ naturally flows out their innate identity, so they will appear to be superstars to those of us who weren’t born with one of these identities.

So we spend year after year sitting on the bench watching them be them, intimidating us into nothingness, worthlessness, and pew-warming boredom. When this revelation hits us, we will move Derek and those like him into the position they were created to play: COACHING.

If you are sitting under someone’s ministry (not that I would tell anyone what to do) get what he/she can teach you and get out onto your own team where you can be a starting player. At the very least, you’ll have fewer splinters in your posterior.