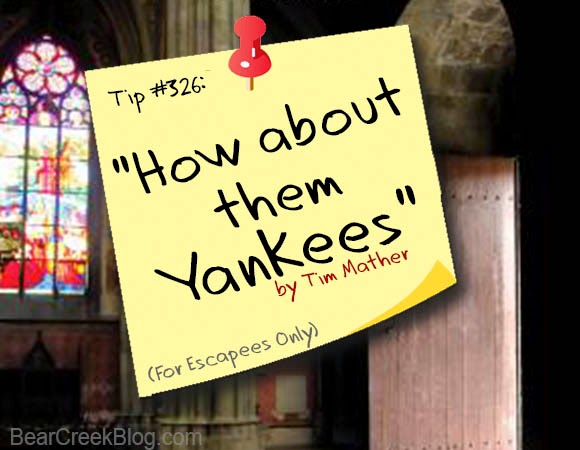 I wonder if you’ve observed the same thing as I: Christians – as a species – are really thin-skinned. Perhaps it’s because we were so victimized by darkness in our previous incarnation and the wounds have never healed; or maybe it’s just because we’re trained to be reactionaries, always obliged to “defend the faith.”

In any case, we are pretty prickly about anything outside our little doctrinal sachet. This phenomenon is revealed in the myriad of denominations, as well as rifts even within one’s own herd. You’ve seen it too: First Baptist Church, Second Baptist Church, and Third Baptist Church, all in one town. I once actually saw a sign proclaiming, “Welcome to the Fifth Methodist Church.”

Clearly, we can’t get along with each other, let alone with someone who attends a home church. As a home church person, I am constantly put in the position to defend what I am doing, or more precisely, what I am NOT doing, i.e. not going to a Sunday morning church service, not submitting to some other person’s covering, or not part of some bloated denominational structure.

When we first left the traditional church system I actually wasted time trying to explain what we were NOT doing to those whose fears made it impossible for them to understand. It caused some pretty violent rifts, most of which have never healed.

So I’ve got a few thoughts for those of you who are struggling with your escape from church.

Most importantly, stop trying to convince anyone else to do what you are doing. This stuff must be left to the Holy Spirit. We are so driven by the perverse “conversion” mentality that we carry it over into house our church goings-on. Making converts is Father’s domain, so let Him give them the revelation. If you give them your revelation, it will always remain yours not theirs. Remain friends (if that’s possible) with those within the structure, make new friends with church folk and leave their revelation to the King.

The next thought is pretty simple: Stop beating up on the institution. All it does is hurt feelings and break relationships. Most of the clergy know church doesn’t work but the rank and file, as a rule, have no idea. They are thrilled to bring their friends to the sheep barn and get them involved in the barnyard fun. Hey, most of us came into the Kingdom through some church meeting or organized religious gathering, so why pitch such a fit about it now? It is what it is; leave it alone.

As I said at the top, church people are generally too wounded to grasp any concept of freedom from the constraints of the institution. They have been bombarded with the control of clergy, “Don’t forsake the assembling of yourselves together” and, “All Christians must attend a church and be under someone else’s covering.” Listen, you used to believe the same thing, right? This constant assault of loyalty to the institution like church membership and attendance records creates an incredible sense of guilt not easily shattered. So, the cure for it all is not you assaulting them in the name of freedom, but rather, you letting them be free to do whatever they feel Father is leading them to do.

If you have to convert everyone to your way of thinking, then you are as controlling and manipulative as the system you have escaped. Moreover, you are still wounded, and your wounds control you to the extent that you would sacrifice pure love at the altar of conversion.

Haven’t you discovered that the “promised land” of house church is full of giants? Me, too. So it is trecherous for a healed person let alone one who carries deep and abiding wounds.

If an institutional person takes it upon themselves to convert you, then your course of action is plain: Change the subject. Don’t even talk about it. I know you perfectionists can’t even understand the words in that sentence, but try it anyway. “Father has been taking us through some different paths. Could you pass the pickles?”

Don’t let them bait you into an argument; it solves nothing. The fear they feel for you is based in the control paradigm of the institutional church structure. So thank them for their concern and say this:

"What about them Yankees?"