Confessions of a Chicken 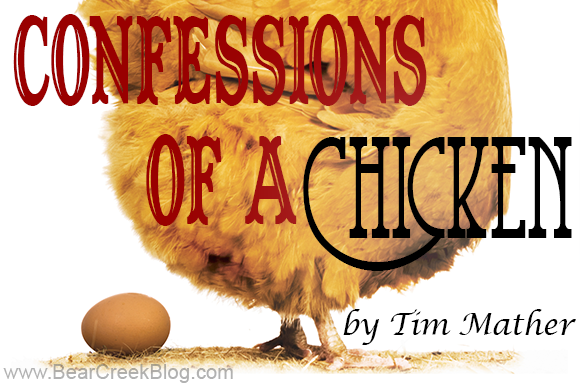 You laugh, but the life of a chicken is ghastly. Imagine pushing out something the size of your head, every day of your life!

You think your life is stressful? Consider the psychological implications of having huge wings that aren’t even strong enough to get you off the ground. As the therapist says, “How does that make you feel?”

With wings, one ought to fly, but no, your life is confined to something called a “coop” that smells like cat pee and is small enough to keep you from roaming free and fulfilling your potential.

Above all, you are afraid of everything. Strange sounds in the night, people, other chickens, so much so that fearful folks are called chickens. How degrading is that?

It sucks being a chicken.


My earliest memories are of being called a chicken by my older brother. At night, I was tortured by specters roaming around my bedroom; in the daylight, apparitions moved throughout my peripherals: places on the edge of eternity were the worst – hospitals, graveyards . . . church. Making a list of my fears, while informative, might bring on a panic attack.


Month after month fear- riddled saints take an enormous risk to make the trek to Portal to perhaps find relief from the onslaught of scary stuff ruling them.


As one might imagine, casting out a spirit of fear is enormously satisfying. Having been set free myself some thirty years ago, I take great pleasure in midwifing a battered saint onto a new path toward freedom and liberty.


Fear is one of the basic emotions often hijacked by the dark side and used to subjugate the saints.


The primary motive of Satan and his troops is to counterfeit anything they see Father doing. Isaiah 14:12-14 spells it out: “How you have fallen from heaven, O morning star, son of the dawn! You have been cast down to the earth, you who once laid low the nations! You said in your heart, “I will ascend to heaven; I will raise my throne above the stars of God; I will sit enthroned on the mount of assembly, on the utmost heights of the sacred mountain. I will ascend above the tops of the clouds; I will make myself like the Most High.”


There you have it - I will make myself like the Most High. Satan is trying to take Father’s place, to be Him. And what is Father’s primary desire? Worship.


So if Satan is motivated to be Father then what might he assume as his own prime desire?


So, life as a chicken is pretty much just stupidity. A thought for you chickens reading this: “If God is for us, who can be against us?” (Romans 8:31).