The Pit of Despair 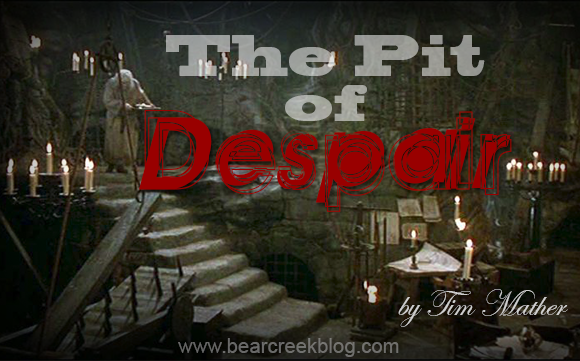 I’ve always suffered with depression. It would come over me like a shroud and I’d sink into the pit of despair (random movie reference) without means of escape. It was forever part of my life, so, knowing it would come again, I made adjustments for its effects.
Until we moved to Georgia.

Let’s back up a little. One day, while struggling to make some much needed changes to the routine in the armory at Minot Air Force Base, I found myself standing at the boss’s desk with my hand on the butt of my revolver. The words, “I should shoot this man and put him out of everyone’s misery” were clanging around in my head. Before pulling the weapon, a thought flew by, not really competing with the adamancy of the first, but sort of attention-grabbing in its subtlety.
“You need some help, Tim.”
Knowing it wasn’t in my best interest to put a bullet in his noggin, I decided to get some help. After a bunch of tests and a few sessions of “What do you think of your mother?” and “Do you like to hurt small animals?” the psychiatrist determined that I was in what he called Clinical Depression. Big deal, I knew that. I could have saved him a lot of time if he’d just asked me. His solution? Drugs.
No thanks (mostly because I thought I’d like them too much). I just created mechanisms to help limp through those times and went about my not-so-merry way.
Years later, I developed a friendship with two guys who suffered in the same way. One of them (let’s call him Ed) came to us for prophetic deliverance. Needless to say, because I had like symptoms, the session was a bit out of the ordinary. The picture I got was of a combination of a bull and a bear. It was freaky, to say the least. But then, it spoke to me, not through the Ed’s mouth, but in the spirit realm. That was the first time anything like that had happened to me.
As it was talking, I asked Ed if he heard what it said. He quoted it back to me almost verbatim. The demon of depression was trying to push us both into hopelessness and despair in order to maintain its foothold in Ed’s life.
It didn’t work.

After deliverance, Ed flourished and never suffered from depression again. Not so with the other guy (we’ll call him Hank). Hank went through deliverance and was set free from a bunch of stuff, though not including depression. Often when we’d talk on the phone, Hank would attempt to pull me into his plight. It felt like he would hand me one end of a rope and then jump off into a well holding the other end. By the conclusion of the conversation, I was hurling into the darkness with him and it would take weeks to get back out again.
Maybe you’ve had relationships like this – sometimes it’s better not to know one another.
You see, sometimes depression is demonic and sometimes it’s just physical. Some folks, like me and Hank, have that sort of brain chemistry. This is a healing issue, while Ed was healed when a demon was ejected.
What brought this to mind? I was prescribed a new blood pressure medicine last summer and within a few weeks, it was like old home days: depression set in. The sadness, lack of energy and the physical pain. It was all back. My son in law Googled my new medicine and discovered that one of the side effects is, you guessed it, depression. Since it had been away from me so long, I had no defense except to stop taking the meds.
After climbing out of the abyss, I kept thinking about you. You know about depression; you may even be medicated for it. You put on a mask to keep it hidden. But it rules you. Here are some thoughts on the matter: Find out if it’s demonic. If it is, then you will be free from it forever. But if it’s physical, there is healing.
We are asked this question repeatedly: “Why are you living in Portal, Georgia?”
Surprisingly, the move to my promised land of Portal, while happening during an acute bout of depression, cured me. I haven’t jumped or slid into the pit for six years.
It’s the sunshine.
The sun rarely shines in upstate NY (average of 79 days per year) but, down here, it’s out and healing most of the time. This is one of the reasons Father supernaturally moved us to this out-of-the-way station: to heal me so I can facilitate healing and deliverance in others without impediment.


So, what are you waiting for? Find healing and freedom from the pit of despair.