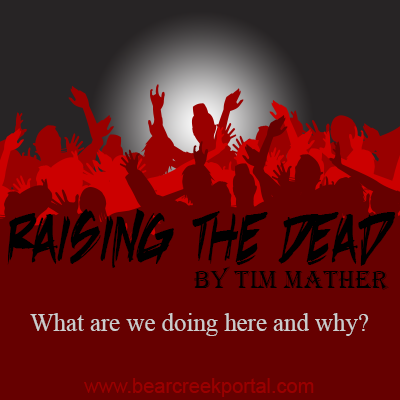 Here is a vision:

As I looked, I could see the backs of a crowd of people to my left. They were intently looking in the same direction away from me. It was obvious they were engaged in worship--some with hands raised, some with bowed heads, most were singing. I watched myself disappear into the crowd and reappear dragging a dead person by the collar. I dragged the person across the street and laid him on his back with his head against the curb. I continued to enter and reappear with more dead people until there was a long line of bodies lying side by side along the curb.

All at once, I began to weep over them because they were dead. Then, I walked out before them, raised my hands and spoke over them. I could not hear what was said, but immediately, they all sat up. For the next few minutes, they began to recover and make their way, one by one, to a standing position. It took some longer than others, but eventually, they were all standing.

As their recovery process was proceeding, I disappeared once again into the throng and began dragging more dead people out. When those from the first group were able to stand and then walk, they joined me in dragging more and more bodies out of the throng. Each time the area along the curb was full I stepped forward, raised my arms and spoke. The whole line of bodies would sit up alive, work their way to a standing position, and eventually help us in our work.

Before long, my view began to pan back to see the extent of the crowd worshiping off to my left. There were hundreds of thousands, maybe even millions, gathered around a circular object in the middle. This object was domed toward its center and was turning very slowly around, much like a merry-go-round. It emanated a bright light that the people worshiped. At the center of the object stood a brilliant angel with his arms outstretched receiving the adoration of the crowd. The people were worshiping the angel in a myriad of worship styles and traditions, from the solemn to the exuberant. As I looked closer, the Holy Spirit opened my eyes to see that the angel was not an angel of light after all but a dark angel appearing as an angel of light. The people were worshiping this dark angel, not knowing that it was a spirit of false religion.

Then, Father showed me what it meant:

The crowds of people were not the throngs of some cult religion. Rather, they were major portions of the Church of Jesus Christ upon the earth. They were actively involved in their own methods of worship without regard for the source of the light. They were going about their church business--some vigorously, some lethargically--but all with some level of commitment. Most of the worship and church business was being done out of guilt without a true and intimate relationship with the one honored.

These are the religious lost.

I was sent into the crowd to retrieve those who had died in the middle of worship of the dark angel. They were the ones who KNEW they were dead, not those who thought that their religious activities still held some life. This is a picture of the people and denominations that no longer make any hypocritical pretense of spirituality. They know there is no life and they have become desperate for the return of the Holy Spirit breathing life into their dried bones. It is a mystery how I knew which ones to drag out of the crowd, though it was evident this identification came from the Holy Spirit.
The act of speaking to the dead bodies brought them back to life. This is a picture of the mission statement of Jesus when He read Isaiah 61 for those gathered in the temple. “The Spirit of the Lord is upon me, because he hath anointed me to preach the gospel to the poor; he hath sent me to heal the brokenhearted, to preach deliverance to the captives, and recovering of sight to the blind, to set at liberty them that are bruised, to preach the acceptable year of the Lord” (Luke 4:18-19 KJV). As the people became whole enough to stand, they were immediately put to work dragging more dead out of the crowd and bringing others to wholeness.

A spirit of false religion, that is, witchcraft, has deceived much of the Church. This spirit appears as an angel of light, but its true motivation is binding the worshipers in darkness. I began to understand that the spirit of witchcraft was manifesting in the Church as control and religious spirits, using manipulation and false spiritual authority. Well-meaning leaders had taken control of the sheep in an effort to keep them on the path of righteousness. However, this control and manipulation is what keeps the Church impotent as an army and distanced them from the One with whom an intimate relationship should be developed. The man-made religious system designed to maintain the sheep is the very thing that has drained out the power and intimacy of the Body of Christ.

Our mission is made crystal clear in this vision: To reach into the organized religious system and bring out those who have been made desperate to know the life-giving breath of the Living God in spite of the bondage of their doctrine and in spite of their theological training. The harvesters miraculously find those who are dead and desperate, raise them from the dead, and the Lord of the Harvest sends them into the harvest fields to bring the true light of salvation and wholeness to the multitudes who will otherwise die in their deceptive religious stupor.

This vision is the initial impetus for despising what the organized church has perpetrated upon the people who call upon the Name of the Lord. Since that initial vision, the work has continued and there are many who have made the transition from deadness to life. What must be understood is that this kind of work cannot be done within the structure of the institutional church.
Hence, the glorious dynamic of the open church!

The only reason to go back into the traditional church is to find the dead and drag them out. The comfortable, seemingly safe pews of the structured church are seductive. It is much easier to sit and do nothing in the name of religious pride than it is to be trained to minister in your home. The simplicity of the open church combined with an active deliverance ministry is the only way to freedom. Drag them out, call them to life, heal them in Jesus’ name and send them into the throng.