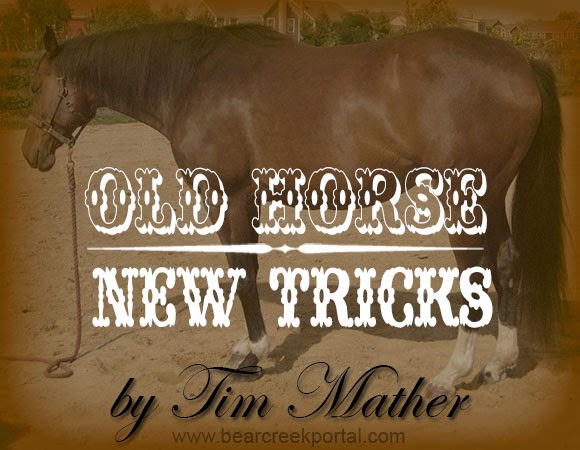 You’ve probably seen it in a wild west movie: the cowboy rides into the frame, dismounts with a flourish dropping the horse’s reins to the ground, and he goes about his business – but the horse (let’s call him Ed [not his real name]) just stands there. Is he tied up? Nope (that’s “No” in cowboyeeze). Is he restrained in any way? Nope. Is he free? Yep (that’s… well you can guess what it means).

So here’s the question: Why does Ed just stand there as if he is bound to something?

Training and experience have been combined to create a false sense of restraint for our horse. Over the years, his trainer always tied Ed’s reins to something in the ground – a rock, an anvil, or maybe a stake driven into the earth. In the early days, our horse would think he could pull away and escape, but the knots were always firm and, in spite of Ed’s best efforts, he remained secured.

Over time, Ed’s training controlled his experience to the extent that he came to believe in the power of the confinement and became passive to its effect upon his freedom. After all, he’s a smart horse and adding experience to the training produced the desired results: when Ed’s reins hit the ground he is tied up – whether they are actually tied to something or not.
For the rest of Ed’s life he will be controlled by the illusion.
A while back, I was sort of captured by the question of liberty as compared and/or contrasted to freedom. I went on a search to find out whether they were, as most people believe, interchangeable, or if there are distinctives. Modern dictionaries use liberty to define freedom and vice versa, but I keep going back to older and older dictionaries to see it has always been so.
It turns out there are differences!
Returning the Ed’s plight, the truth is obvious to all of us: Ed is really free to run away, or maybe even to find a lovely filly named Edna and take her out for a nice moonlit dinner of oats and hay.
So what retrains him? What he can’t see is that there is no stake, no anvil, no rock! He only THINKS there is.
He is held captive by his own thinking.
The story of our fine horse, Ed, is the story of most people. We’re all born into a corrupted training system and we all experience our own stakes. After a while, the consistency of that training builds a collection of experiences verifying the lies and, in the end, our patterns of thinking are established. Consider that Ed is not really miserable in his thinking so he doesn’t give escape much thought: It’s just the way things are; it’s just the way he was raised.
This is the way demonization works, especially in Western cultures. We don’t often see someone speaking in a demonic voice, foaming at the mouth, or doing the flounder on the floor under the influence of demons. What we do see is folks whose thinking has been confined by stakes and rocks and anvils for so long that their default patterns of thinking are “limitation” or “I can’t” or “That’s nice for others, but not for me.”
The root word of “demonization” describes our plight: A demon caused passivity. Demons operate like the Wizard of Oz when Dorothy and the kids showed up in his castle: “Ignore the man behind the curtain.” They convince us of the veracity of the stake and delude us into being passive to their control. Our freedom has been stolen, killed, and destroyed for so long (see John 10:10), our thinking has aligned with the demon’s agenda.
Upon making the leap through the Door between the Kingdom of Darkness and the Kingdom of Light (see John 10:9) Father’s agenda must become preeminent. However, most new citizens of the Kingdom of Light are bombarded with rules – don’t drink smoke or chew – as opposed to setting out on a path of changing the way they think. The do’s and don’ts of church life take the front seat while the real agenda is forgotten. The transformation into a healthy, functioning child of God is left to chance.
THE TRANSFORMATION MUST BE INTENTIONAL, otherwise, after twenty or thirty years of being a “Christian” only produces a religious shell instead of someone who thinks like the King of kings. So, demons are assigned to help maintain the darkness thinking we were raised in, schooled in, and continue to function in, even years after entering the Kingdom.
So, how do we affect this transformation? Be[ing] transformed by the renewing of your mind (Romans 12:2) is the only path. The transformation is accomplished by exchanging Darkness training, experience, and thinking for Kingdom schooling producing experiences opposing those we have always known, producing a new way of thinking, producing a legitimate new creation (see II Corinthians 5:17) rather than the bound, ineffectual creatures skulking among the pews in the churches of the land.


The difference between freedom and liberty is this: Freedom is the absence of bondage; Liberty is the ability to THINK free and to ACT UPON that freedom. Consider this: So if the Son sets you free, you will be free indeed (John 8:36). Who do you know that is truly free? Who really functions in liberty without being confined to the lies of the Kingdom Darkness? You? No? Then I submit to you that the first step is to undergo prophetic deliverance to break the influence of the demons who maintain your thinking patterns. Then, find true wholeness and inner healing. What are those things? Wholeness is the very definition of real Kingdom living through healing the damage that has been inflicted by darkness training, experience, and thinking.