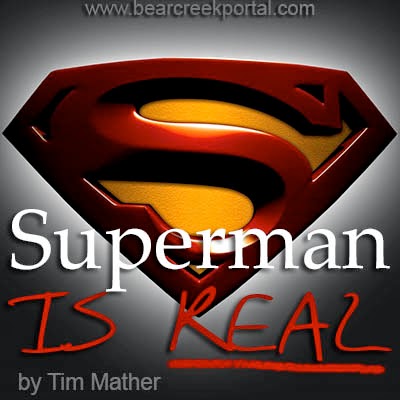 I am always intrigued by the imagination of man. For example, where did we get the idea of Superman? Stronger, faster, leaps tall buildings, sees through walls, among other things. Who is this guy and how was the concept conceived?

I believe he actually exists.

Let’s go on a search for the real superman.

To review: The human race is a race of natural kings with rulership over the earth and all that it contains, except for other people; Adam and Eve messed up and forfeited their dominion for the sake of pride; the second Adam came – Jesus Christ – and recovered our original dominion . . .

Hold on to your hat, we’re going for a ride.

Obviously, there are two different origins of authority. Let’s assess the second one first. It is earthly, that is, of the natural realm on this planet. The Genesis 1:26 passage is the job description for the natural king as he/she rules over fish, birds, beasts, creepy things, and the earth itself. From the time of Adam and Eve to the time of Jesus when he was on the earth, human dominion was restricted.

Throughout His ministry life, Jesus demonstrated what natural kingship would hereafter look like. While natural kings have been ruling as best they could over constricting natural laws, Jesus expanded the definition to include the reality of ruling the natural realm in a supernatural way. He was not confined by the natural laws as understood until that point in history. He challenged, and therefore, transformed all of life. Here’s a brief sampling:
He showed us that instead of being ruled by the natural realm, we can now rule it.

This promotes us to responsible kings tending the globe for our benefit. I’m reminded of the time when a well-known prophet was urgently asking Father why He didn’t dissipate the forces of hurricane Katrina.

He asked, “Lord, why didn’t you do anything to stop this disaster?”

To which the Holy Spirit countered, “Why didn’t YOU do something?”

The revelation was clear: We, as kings, are responsible for our domains.

Given natural dominion at birth, having been birthed again into the Kingdom of God, thereby receiving the upgrade to supernatural natural kings, we retain all the rights privileges and responsibilities of such authority.

So, take care of your domain.

I have decreed over my domain that there will be no tornadoes. In the years since I took this stand we have watched the weather radar as storms bearing tornadoes split in half and moved right around us only to join back together on the other side.

A couple of years ago, I heard on the news that our area was in a drought. I stepped out on my porch and commanded the wind to go get us some rain, enough rain to bring us out of the drought. I told the wind how much rain I wanted and in how many days. On the day I had chosen, I was watching the Weather Channel and this is what the weather anchor said, “A storm has popped up in the Gulf of Mexico and is headed through Florida in a northerly direction. We’re not really sure where this storm came from; it just sort of appeared.”

We got exactly the amount of rain – to the inch – on the very day I chose.

I’ve spent a bunch of time working on the weather, and now I’m practicing on fire ants. Father must have been in a really bad mood when He created those little monsters.

He sent out the twelve to practice this new authority: As you go, preach this message: “The kingdom of heaven is near.” Heal the sick, raise the dead, cleanse those who have leprosy, drive out demons. Freely you have received, freely give. Luke 9:1-2.

Then He expanded the training to seventy or so more: Heal the sick who are there and tell them, ‘The kingdom of God is near you.’ Luke 10:9

Here’s a little something to stretch your vision of what it means to be a follower of the King of kings: “And these signs will accompany those who believe: In my name they will drive out demons; they will speak in new tongues; they will pick up snakes with their hands; and when they drink deadly poison, it will not hurt them at all; they will place their hands on sick people, and they will get well.” Mark 16:17-18.

And finally, our mandate: “I tell you the truth, anyone who has faith in me will do what I have been doing. He will do even greater things than these, because I am going to the Father.” John 14:12.

As citizens of this Kingdom, we are authorized rulership over spirit beings, over sicknesses and diseases, over natural things that should kill us, and . . . over death itself (once one is not ruled by the specter of death, what else is there to fear?).

He modeled the supernatural aspect of kingship as brilliantly as the supernatural natural. He revealed what ordinary life in the Kingdom would be, specifically, demonstrating each of the fruit of the Spirit found in Galatians 5, as well as the supernatural gifts of the Holy Spirit listed in I Corinthians 12. Here is a sampling of the gifts:

He healed the sick, raised the dead, cured incurable diseases, and drove out demons as the normal course of action in the new Kingdom model.

So, where are we? We argue over the stupidest things, like if the gifts are for today, and whether signs, wonders and miracles real, when these are the hallmark of Kingdom living.

Why not practice being a supernatural natural king?