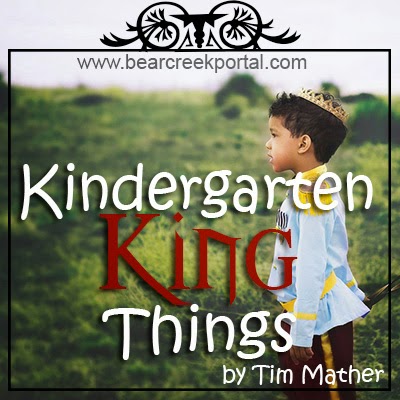 To address the issue of the Kingdom it behooves us (I love that word, “behoove”; it makes me think of something one would do with a horse, as in, “Don’t you think it’s time to behoove that horse?”). Anyway, it makes sense to start at the footers and build the building from there.
Consider the implications of this: They will make war against the Lamb, but the Lamb will overcome them because he is Lord of lords and King of kings – and with him will be his called, chosen and faithful followers. Revelation 17:14.

It begs the question, “Lord of what lords, King of which kings?” Is He only the King of royalty? Is He just the Lord over the ruling class?

Here’s another question to ponder: What is the first gift given to mankind? You might venture “the breath of life” or maybe even “life” itself. But what about after they were created? What was the first gift?

And God said, Let us make man in our image, after our likeness: and let them have dominion over the fish of the sea, and over the fowl of the air, and over the cattle, and over all the earth, and over every creeping thing that creepeth upon the earth. Genesis 1:26 KJV.

What is dominion? It is defined as rulership; power; authority; control; dominance; and command. How’s that for a gift? It seems to me that this is the job description of a king! Mankind was created with the express intent to rule over his environment, over fish, birds, livestock, and over the earth itself, and all those creepy things (maybe like your brother in law?).

That’s a pretty good list. It is significant that there is no mention of rulership over other PEOPLE. Only when the curse was spoken over them did the idea of controlling one another come into existence. Your desire will be for your husband, and he will rule over you. Genesis 3:16. Now, most guys suffer under this delusion: She wants me! But what’s implicit here is subjugation rather than she wanting your body.

Adam and Eve’s act of pride in thinking they knew more than Father corrupted the very first thing He gave them. Dominion was not wrenched from their hands. Instead, what was intended to be wonderful was warped to include something malevolent: Competition.

From that moment until now, the innate desire to rule has been a double-edged sword. We see the evidence of the natural kings (kings over the natural earth) who have gone before us. They have taken dominion over many things they wanted to change. How about air conditioning? Some king said in his heart, “Man, it’s hot.” And he created air conditioning. If you live in the South like me, that’s some great work! Aren’t you glad there was some king who took dominion over travel and decided the man could indeed fly (even if it is just enduring a seat in coach)? Even all the tree-huggers among us are only exercising their God-given dominion over the earth, over fish, birds, and creepy things.

Dominion is best seen in the work of kings who took it upon themselves to try to negate the effects of the rest of the curse Father spoke over Adam and Eve. I know you are skeptical here, but remember, we have fifteen grandchildren.

What does that mean?

Listen, pain in childbirth doesn’t make an appearance when my girls have kids. The first thing they yell as they are being wheeled to the delivery room is, “Epidural!!!!” Once that needle delivers its potion, they don’t even sweat, and poof! there’s another grandbaby.

And what about the “painful toil” He spoke over Adam? We live in an agrarian area of the country. Have you seen the tractors these guys ride around in? Bose stereo systems, air conditioning, GPS, and seats more comfortable than the Lazy Boy recliner in my living room. Don’t talk to me about painful toil.

We are truly kings over the natural world.

Here’s the next question: What did Jesus make sure to include in His farewell address to us before heading off to the heavenlies to prepare our next home? Then Jesus came to them and said, "All authority in heaven and on earth has been given to me.” Matthew 28:18.

Why “all authority?” Authority over the natural world was given to mankind; Jesus came as 100% man and 100% God, the former qualifying Him to be a natural king, the latter authorizing something more. And hath made us kings and priests unto God and his Father; to him be glory and dominion for ever and ever. Amen. Revelation 1:6 KJV.

This verse is the confirming word on kingship. First, He made us to be kings, that is, natural kings. A king has dominion over his/her domain. This domain is finite; it has parameters which we have already identified: Animals in the specific, and the planet in general. It may be true that our dominion over the earth lacks some measure of perfection, still, a superior measure of authority in natural things was returned to us in Christ.

Since this is a somewhat unique notion, I think it important to test, to see if it actually works. One day I was in our back yard as a great storm headed our way. The wind had been blowing all morning from the west and was growing in intensity by the hour. To keep it from turning into a huge parasail, I was tasked with disassembling one of those temporary tents we used to cover our boat or often as a place to keep out the sun on a hot summer day. It was a ten by twenty foot long canvas attached to a metal frame.

I unhooked the front corner of the canvas and it whipped out of my hand; this wasn’t going to be easy. I envisioned myself hanging on desperately as the wind picked the whole thing up and flew me across the field behind our house.

Nobody wants to see that!

So I stepped back and thought out loud, “What do I do now?”

The retort came straight away, “Do something about it,” quickly followed by “What would I do if I could do what I wanted to do?”

The answer was easy. I stepped back raised my hands like Moses next the Red Sea and spoke to the wind, “Wind, in the name of Jesus Christ of Nazareth, I command you to cease until I take care of this cover.”

What do you think my reaction was? EXACTLY! I couldn’t believe it. Yep, God’s man of faith and power in action.

I set about uncoupling the cover from the frame and pulled it out onto the lawn to fold it up. After a few frustrating minutes trying to get it to lay flat, the thought came again, “Do something about it.”

I was standing on the east side of the cover; the wind had been blowing from the west all day; I was too lazy to walk the twenty feet it would take to get on the other side; so I spoke to the wind from there. I declared, “Wind, in the name of Jesus Christ of Nazareth, I command just one puff of wind to come when I say so.”

A puff of wind came from the east and I flipped the cover up and laid it out perfectly flat just like you would do with a sheet on a bed.

Again, my faith (or lack thereof) statement, “I can’t believe it!”

I proceeded to fold it up and just as I hooked the bungee cord around the bundle, the wind resumed and, later that afternoon, blew in the storm that had been forecast.

Now, for those of you who think this is just too weird, read it and let it go.

But there are many of you who will connect with the truth that we are all born kings. You have probably experienced something along these lines. You’ve thought you were actually born into a royal family and switched at birth, and someday the truth would come out and the throne would be yours.

Even the mousiest person among us has at least thought, or even said, “Things would be different if I was in charge of this place.” We hate it when people tell us what to do. We were all born to be natural kings and the world is somehow malfunctioning. We all know it in the deepest recesses of our beings.